What a year it has been! I am writing this post at the tail-end of my second bout with Covid-19 for 2022. Who would have thought that after 2 years of successfully avoiding the virus, I would get it twice within the span of 6 months! It still sounds pretty ridiculous, but it’s also a humbling reminder that we are far from being out of the woods yet. Perhaps this was just what I needed to move into 2023 with a renewed balance of enthusiasm and caution.

Compiling my Top 10 photos is one of my favorite activities at the end of each year. It reminds me of the places I’ve been, things I’ve seen, and brings back memorable moments while making photographs. The selections are totally subjective and could be based on anything from light, composition, thought process, or even the people I was with at the time of shooting them.

It’s now year 8 of doing this (see more here) and I’m now wondering how long I can keep it up. Haha! Seriously though, I have no plans of stopping anytime soon and I look forward to the day when I can look at these photos as a much older man and be reminded that these moments and photographs happened.

Without further ado, here are my Top 10 Images of 2022, in chronological order. 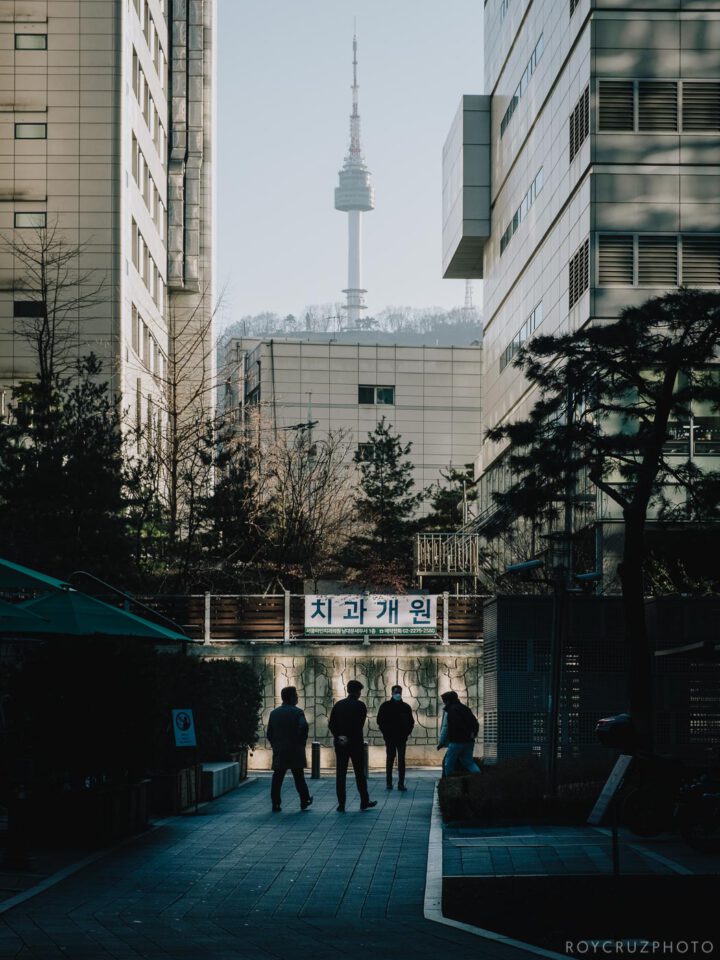 This image was taken in downtown Seoul, around Jongno 1-Ga if I’m not mistaken. I was on my way to shoot an event and I saw this great perspective of Seoul Tower through the buildings. What made it even sweeter was the light shining on the textured wall at the end of the alley. I still don’t know if it was artificial or sunlight, but it made for some perfect silhouettes. I snapped a few of course, but this one was my favorite. There’s a nice separation between the people and basically a beam of light for each subject. Add the overall context and you get a very “Seoul” photo. Overall, a really cool moment where the various elements came together in just the right way. 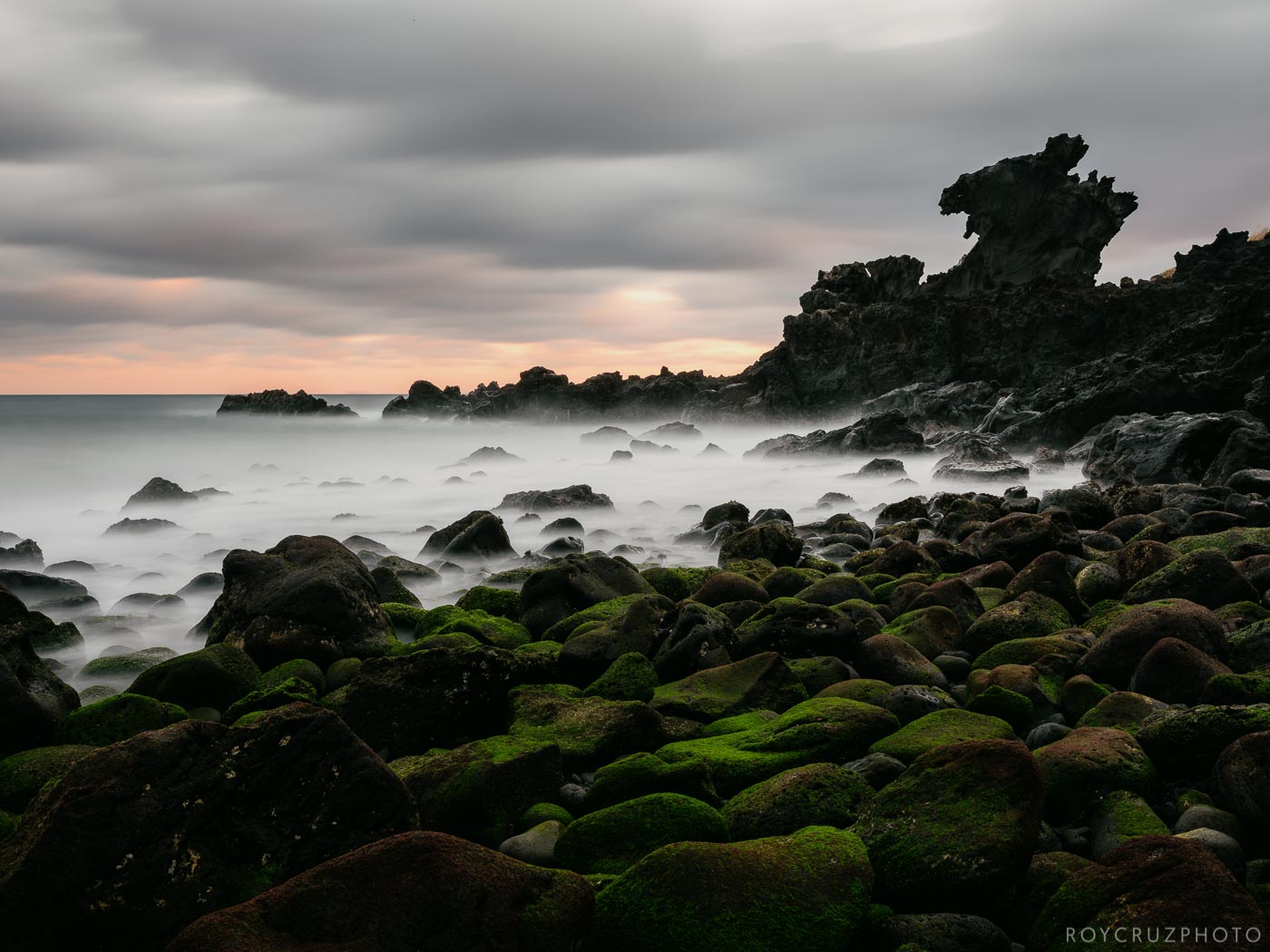 It’s really hard not to love Jeju Island. It has so much to offer in terms of natural beauty, with every corner seemingly bursting at the seams with photographic opportunities. Yongduam Rock is one of Jeju’s many well-known spots. The word ‘yong’ means ‘dragon’ in Korean, and it’s easy to figure out why this place is named as such. This image is a pretty textbook landscape shot, with mossy rocks offering some nice color and texture in the foreground, long-exposure induced mist in the middle ground, and of course the famous dragon head with clouds streaking overhead, again induced by the long shutter speed. There wasn’t much of a sunrise that morning, but it did help add a little bit of color to the clouds for a few minutes. All those elements aside, my actual favorite thing about this image was the people who were behind me as I was taking it. My wife and daughter rarely come along for my photographic excursions, but on this particular day, they powered through the early morning alarm and joined me to grab this shot. They were as excited as I am to see this scene unfold, and it was a wonderful family moment that set a nice tone for the rest of the trip. 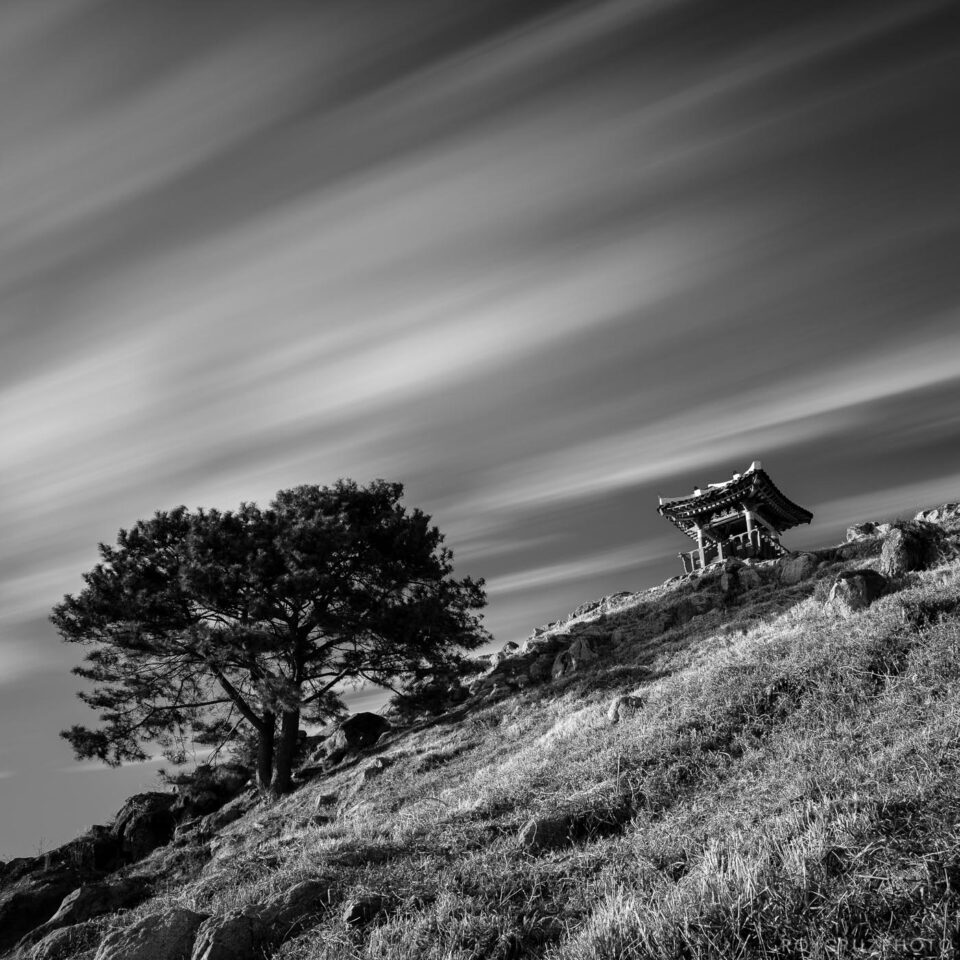 Oksanseongji (옥산성지) is one of the coolest spots on Geoje Island and certainly one of my favorite. Located in Geoje-Myeon, this mountaintop fortress was built in the late 1800’s and is apparently the last castle built by the Joseon Dynasty. Currently, there are only scattered remains left at the site, but it looks like they are planning to restore it. This shot was taken in late January during a fun shoot with my friend Richard Bates. I’ve been to Oksanseongji multiple times, but on this day, the shooting conditions were the best I’d ever seen. There was just the right amount of cloud coverage and we had a spectacular sunset. This image was taken a few minutes before sunset, and I decided to try a long exposure from a low angle to show the fast-moving clouds above. I really like how the clouds turned out and the black and white treatment helped to enhance the streaks even more.

This image was taken after a couple of days of client work in Seoul. I had just gotten a new GF 100-200mm telephoto lens and wanted to test it out. My colleague and buddy Dylan Goldby and I were looking for a place to do a post-work fun shoot anyway, so I suggested Namhansanseong, a historical mountain fortress 25 km southeast of Seoul. In the right conditions, this spot offers a wonderful view of the Seoul cityscape, including Lotte World Tower, Han River, and the N Seoul Tower, all in one frame. When we got up there, conditions were a bit hazy, but workable. In a way, the haze actually helped to add a bit of depth and separation between the various elements from foreground to the mountains in the far background. This was my favorite time of the shoot, when the warmth of the sky contrasted with the cool shadows of the buildings. For this image, I decided to use the wonderful 65:24 “digital X-Pan” ratio that’s offered by the GFX cameras. The aspect ratio offers a good balance of concrete jungle, Seoul’s famous landmarks, and the various mountain ranges surrounding the city. You can’t really see it on this web size image, but this is one of the instances where a medium format sensor really shines. Even with the crop, you still get a large amount of detail and resolution, which is perfect for this sort of scene. 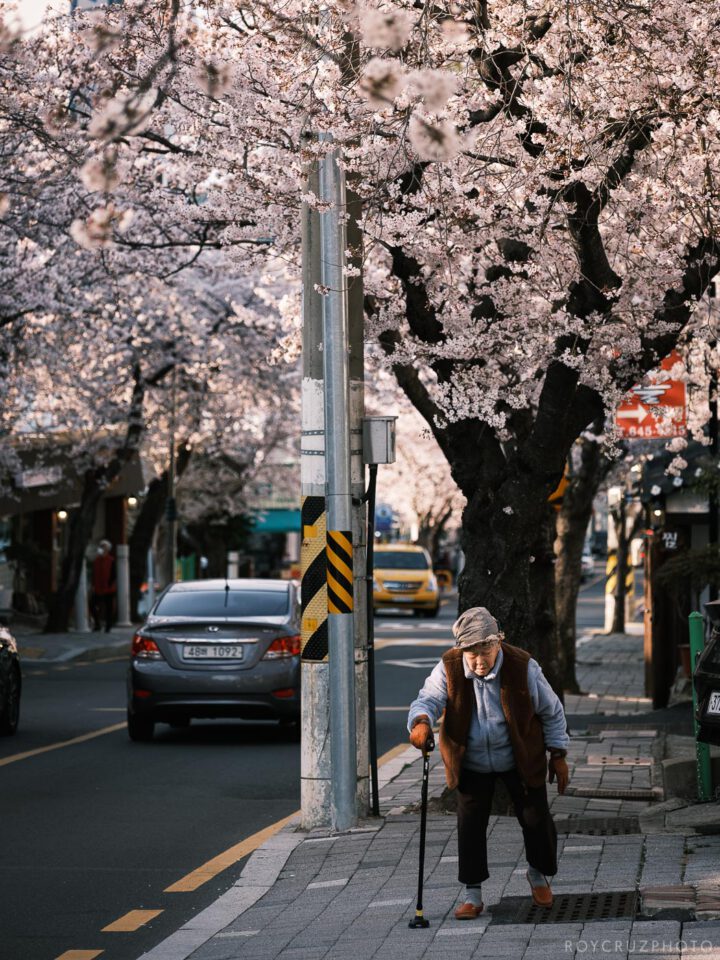 This photo was taken at Tongyeong’s Bongsutgol cherry blossom lane. The blooms had just reached their peak, resulting in a beautiful tunnel of pink covering the entire stretch of road. Late afternoon is a great time to shoot there, as the golden light comes through the trees. This particular lady caught my eye as she made her way slowly down the sidewalk. Her face was lit perfectly by the afternoon light, and she just had a lot of character overall. Each time I looked at this image, one word kept coming to mind: resilience. This lady obviously had it, enduring age and all its ailments, as well as a global pandemic that she never asked for. Zoom out and you’ll see that the trees and nature are resilient as well. Seasons change, time marches on, and life goes on. And lastly, the person taking the photo, still out there after the world was turned on its head for a couple of years… maybe he has a bit of resilience too. 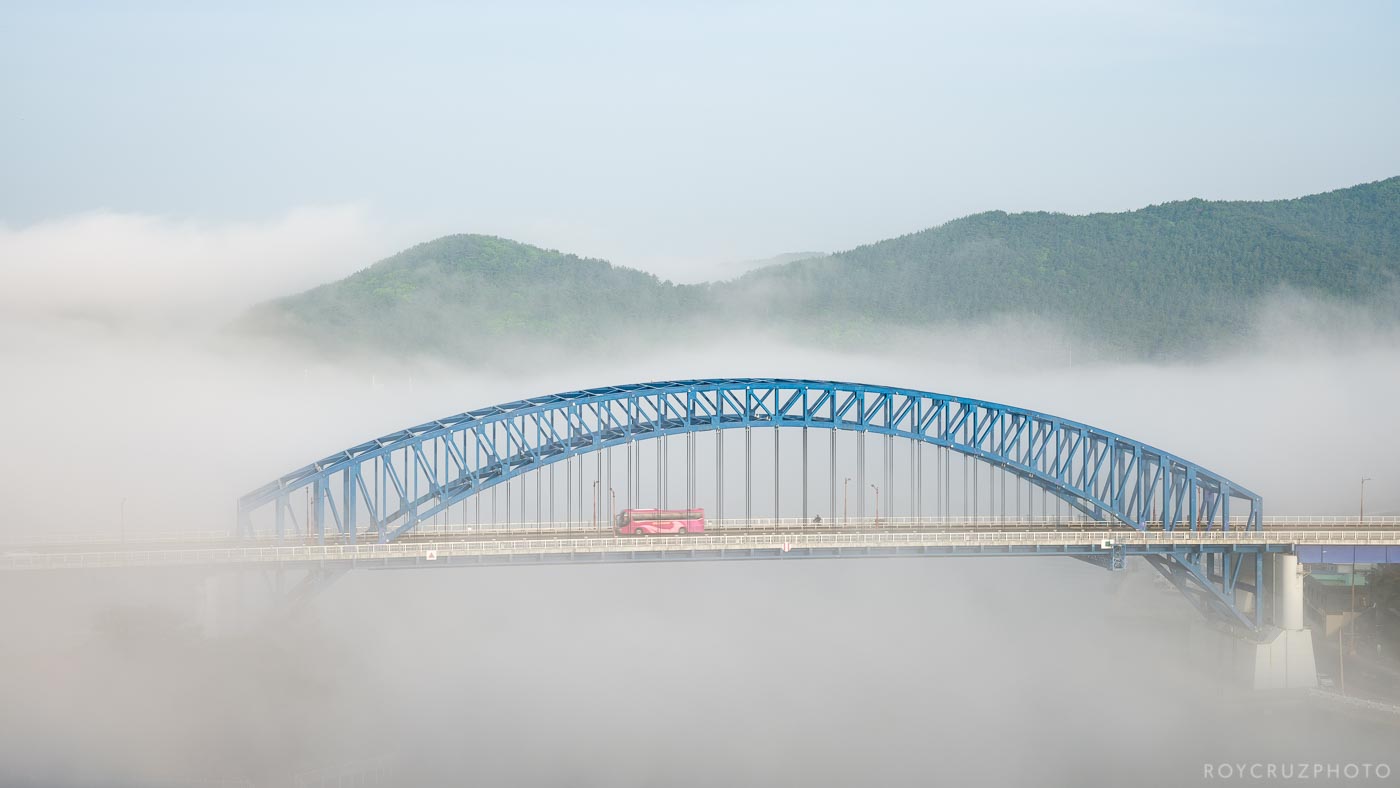 The story behind this photo is a simple one. One April morning, I woke up to find the Tongyeong Bridge and surrounding areas blanketed in fog. In over a decade living here, I had never seen it like this. The scene got me up and out of bed faster than any cup of coffee could, and I shot for the few minutes it unfolded before me. I have a few final images from this set, but this one is my favorite because the pink and red bus just adds that little extra pop of color and sense of a fleeting moment. Fleeting it was, because after a couple of minutes, the fog was gone. 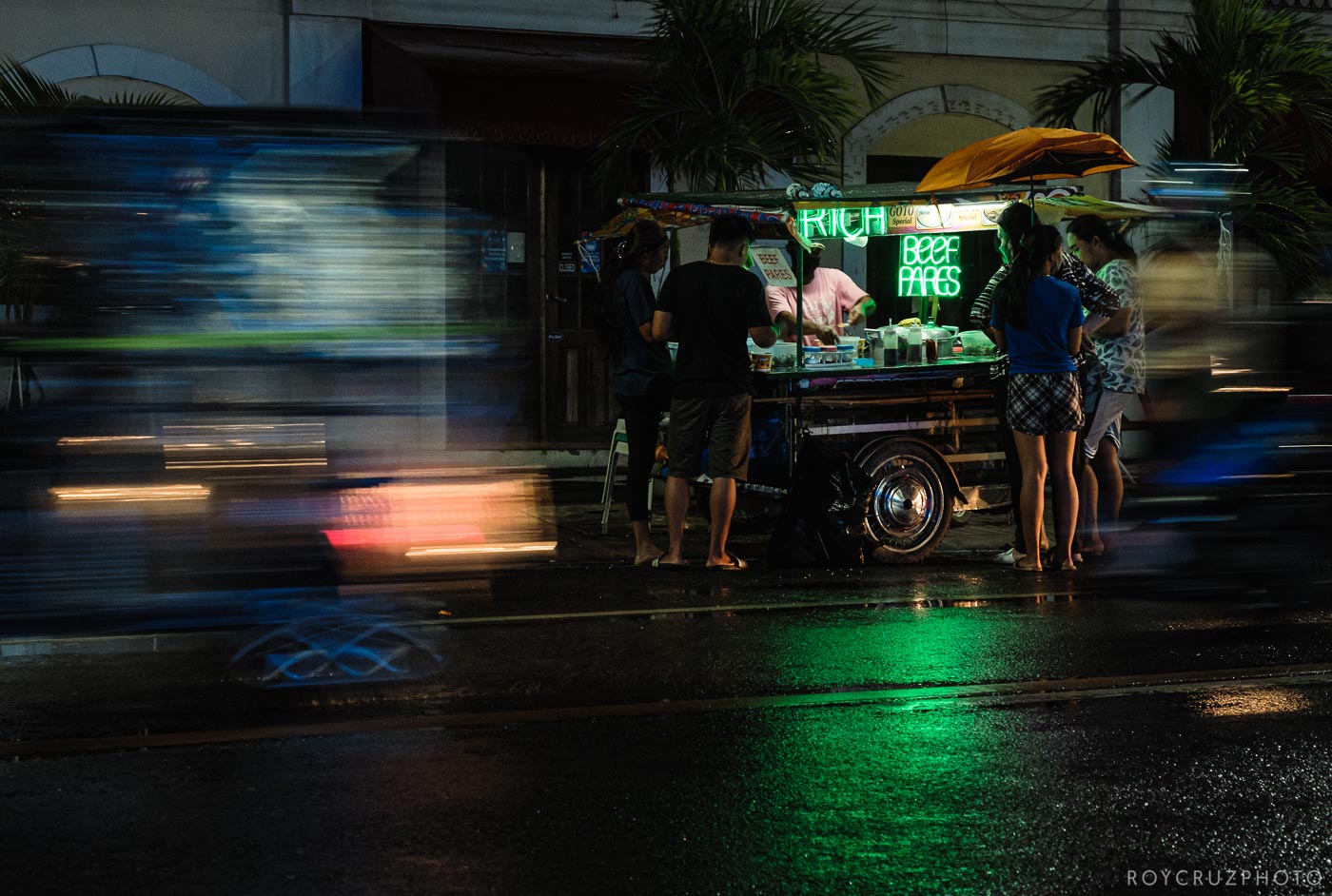 Oh, Philippines. It was lovely to see you again after over two years. Summer 2022 saw the first direct flights from Busan to Manila open back up and you better believe I was on the very first flight out! I was lucky enough to book a coffee table book project during my 3-week stay, and that brought me up to my old stomping ground, Vigan City. We had just wrapped a day of shooting and were going for dinner with the team, when I spotted this cool-looking food cart across the street. It was also raining, which added some nice puddles and reflections to the street. My initial idea for this shot was to have the empty food cart under heavy raindrops. Unfortunately, the rain pretty much stopped by the time I got into position and customers started coming. I changed my plan and decided to frame the scene with vehicles that were zooming by. I’m pretty happy with the result and under different circumstances, I think I would have been right there with the other customers enjoying my own bowl of beef pares. 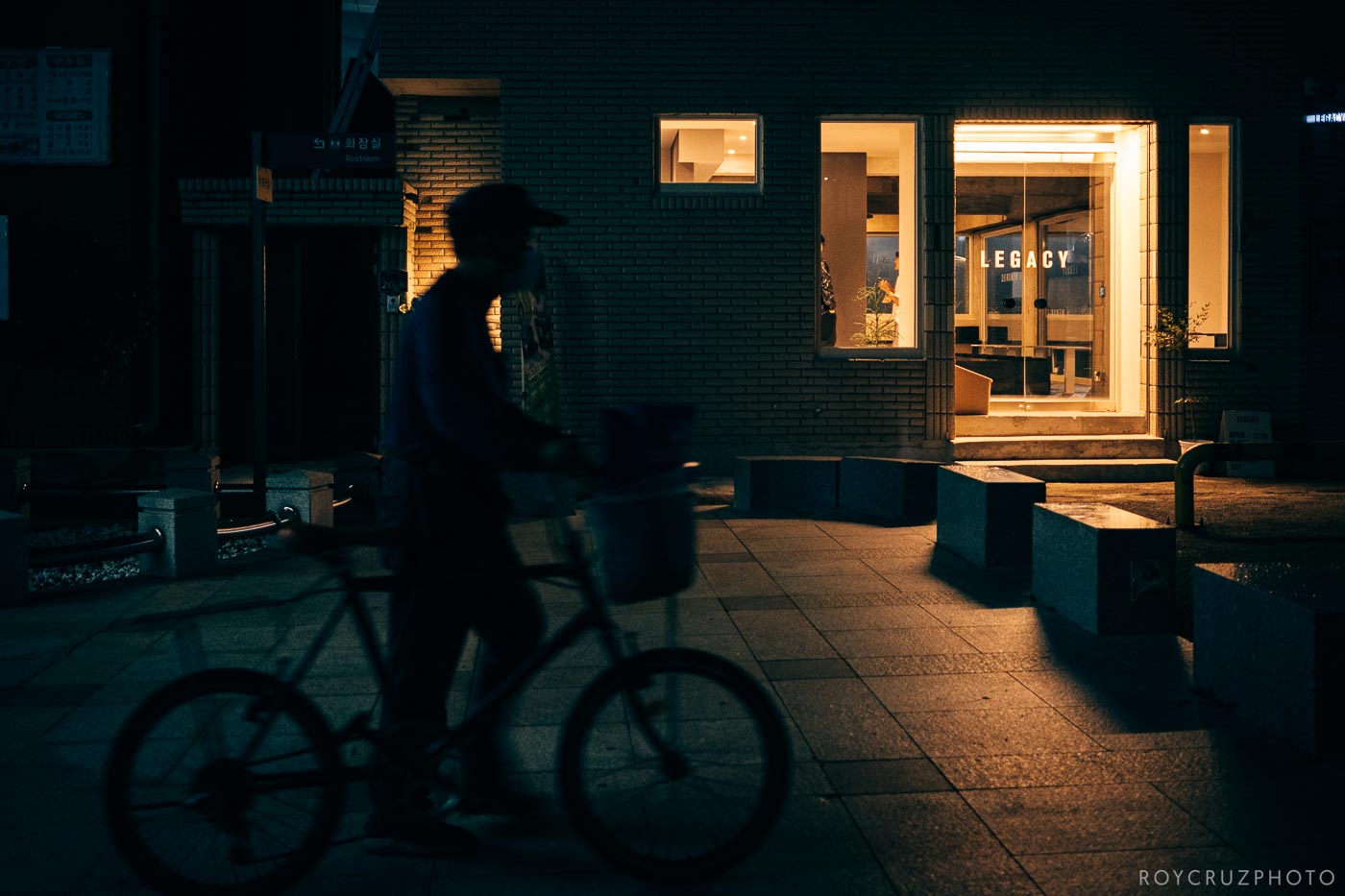 Sometimes photography can be therapeutic. This image was one of many images taken during an evening walk to clear the mind. I don’t quite remember exactly what I was going through that day, but I do remember the feeling before and after. It was a complete 180 in terms of mood and happiness level, and I highly recommend unplanned evening (photo) walks as a tool in your stress-relieving arsenal. In terms of this particular image, I love the strong contrast between light and shadow, warm and cool, as well as the simple, prominent shapes. The coffee shop’s simple, bold name was the icing on the cake that brought this image together for me. 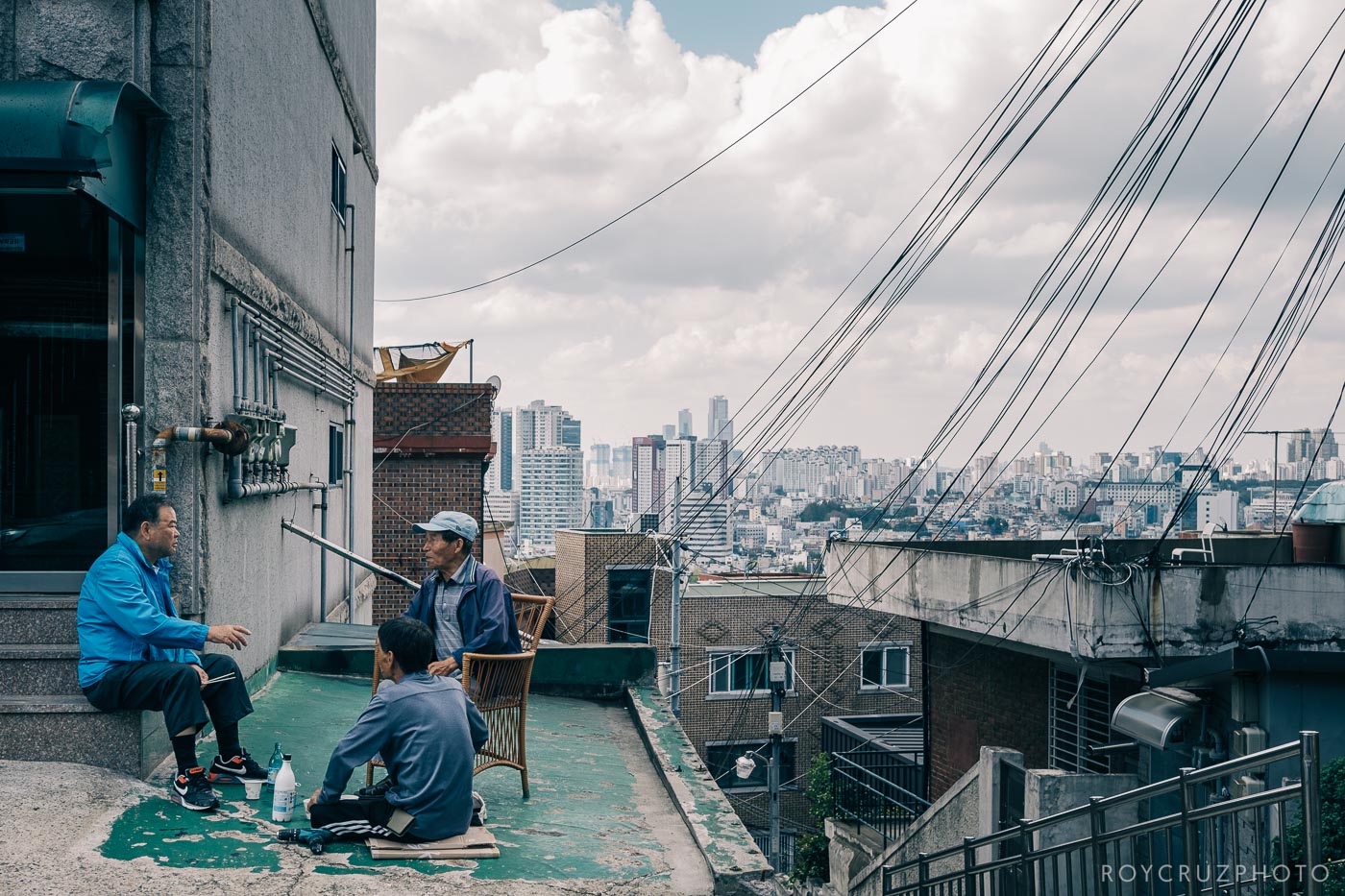 This image was taken in Seoul’s Haebangchon district. The neighborhood’s high elevation gives a great view of the concrete jungle. My mom, sister, and I were walking down the street during their visit to Korea, and we came across these gentlemen enjoying a chat and an adult beverage. Magkeoli and soju at midday on a Wednesday – hats off to you sirs. I made sure to include the mess of power lines attaching to the aging buildings as part of the composition. On this particular day, we had some very nice puffy clouds as well, which enhanced the scene even further. Three silent clicks to capture the right moment, and we were off. I love street photography. 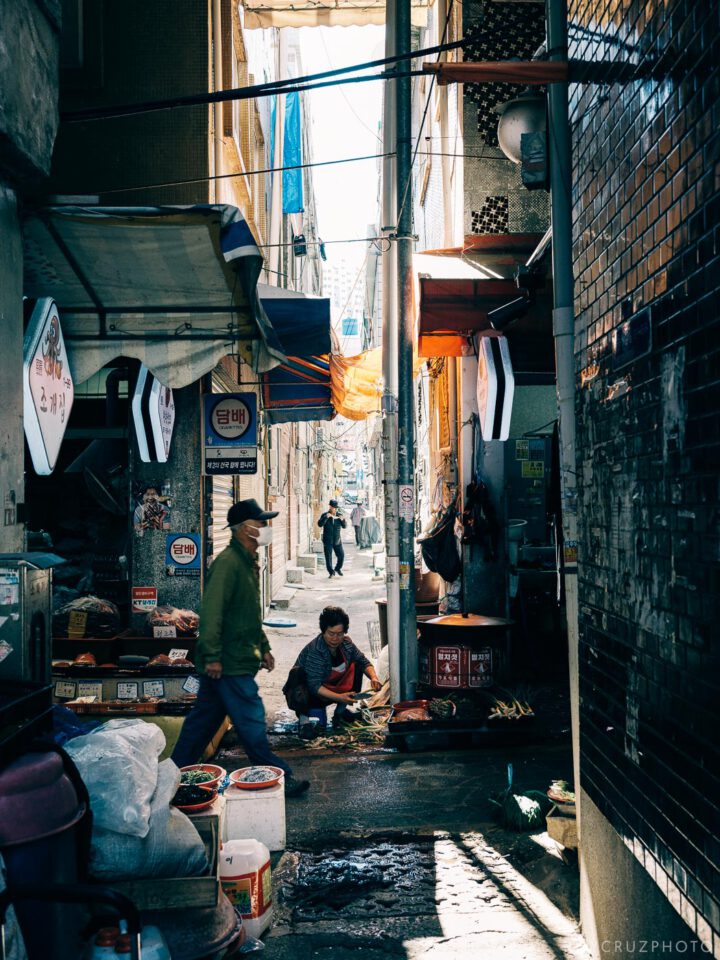 In October of 2022, I visited Geumjeong-Gu in Busan with my mom and sister. The location was originally placed on our itinerary for a certain K-Pop connection, but I figured we might see some interesting things along the way. So I brought my GFX 50R and 50mm f/3.5 lens. A very simple and nimble setup for street photography, but still packing some high-resolution. One of the areas we explored was the Seo-dong Maze Market (서동 미로 시장). It’s a traditional Korean market that has been around for about 40 years. The best thing is, it has not yet been modernized like many markets around the country. The market, especially its surrounding alleyways, are so full of character. This was one of my most favorite frames taken during that day. It has so many elements from foreground to far background, a chaotic harmony of colors, textures, and people that summarize my trip to that area in one image.

And that’s about it! I hope you enjoyed my Top 10 images of 2022. Thank you for coming along on this journey down memory lane. I certainly enjoyed breaking each image down and seeing the set as a whole. If you have any particular favorites, let me know in the comments section.

With this part of my yearly process done, I’m now one step closer to welcoming the new year. I’m sure 2023 will be great and I look forward to what it has in store for us and our cameras. Happy new year, everyone!

Click here to see more Top 10 Photos of the Year.