Yesterday, I received the Fujifilm X-H1. It has been a while since I got a brand new camera and I was fairly excited. However, I was also cautious with my expectations, as getting gear right when it hits the market does have it’s disadvantages. Overall, I’m quite happy with the camera and I’d like to share my initial impressions and first shoot with it.

IBIS, or in-body image stabilization is obviously the biggest selling point of this camera. I shoot a lot of portrait sessions, editorial work, and events in low light, and my usual lens of choice for work is the 16-55mm f/2.8. I love fast primes, but the versatility of the 16-55 fits better with the way I work. With it’s 5-stop in-body image stabilization, the X-H1 and 16-55 seem to be a match made in heaven for fast-paced documentary photography. I’m also looking forward to using the camera with my numerous vintage lenses.

This camera is a partner for my X-T2 and my other main lens, the 50-140mm f/2.8. Since the 50-140 is already stabilized and the X-T2 internals are very similar to the X-H1, they should make for a good pair with similar capabilities. The two bodies mounted on my Holdfast Moneymaker dual camera strap will be great for most of the work I do. Also, since my previous second body was an X-T1, the upgrade is quite substantial.

The video functions of this camera have received quite a boost as well, but admittedly, they are secondary to me. It’s nice to have a range of quality and resolution options for video though, especially for the occasional video project that comes along. And the IBIS makes for some really nice handheld video.

During my first few hours with the X-H1, I did a very non-scientific test. Totally subjective, but a reflection of how I would use the camera in the real world.

Upon receiving the camera, the top 2 things I wanted to test out were IBIS and battery life. So I put on a Variable ND filter so I could use slow shutter speeds even in afternoon light. I also wanted to test out the battery performance with third-party non-S batteries. So I used a 4-year-old third party NP-W126 battery during the first test. 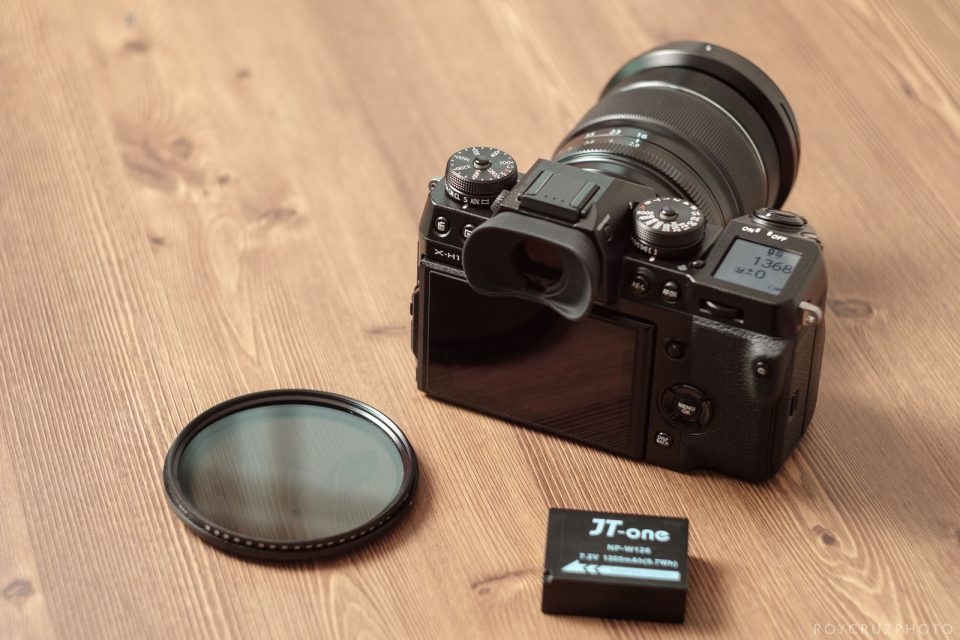 Various other notable settings based on what I’d use in real-world shooting:

For the first part of the test, I took to the streets with the aim to drag the shutter. I kept the ISO at around 200 and the shutter speed from 1/4 to 1 full second, depending on the situation. I adjusted aperture and the variable ND filter depending on the lighting situation. Here are some of my favorite shots: 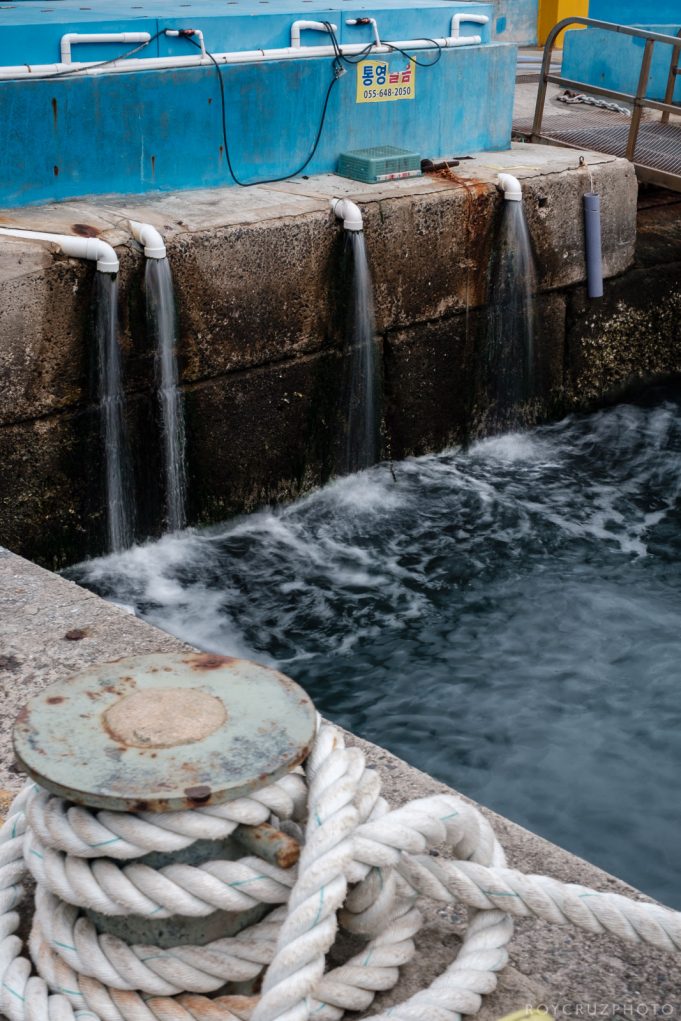 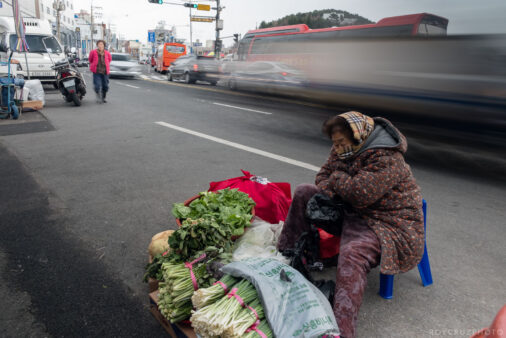 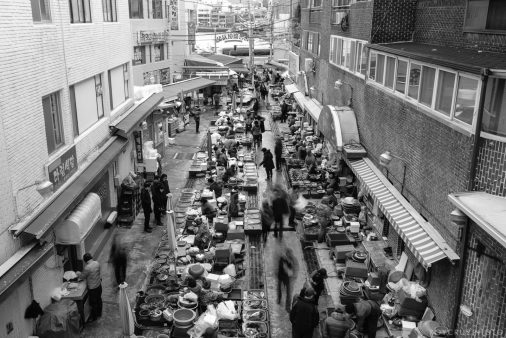 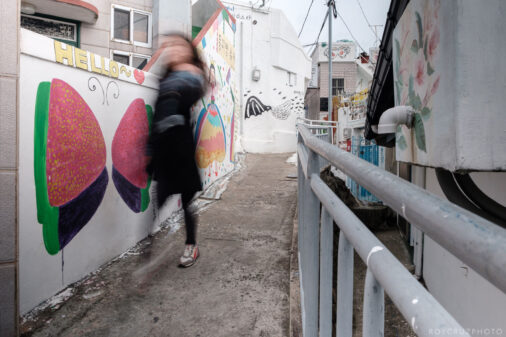 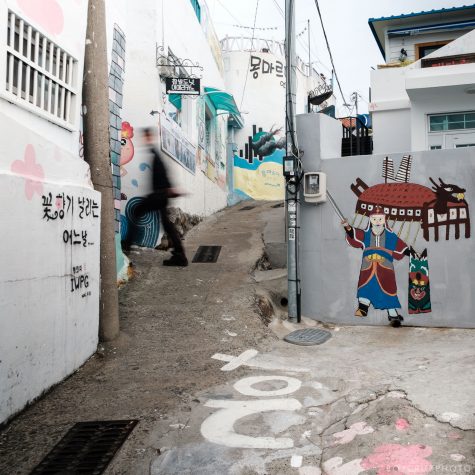 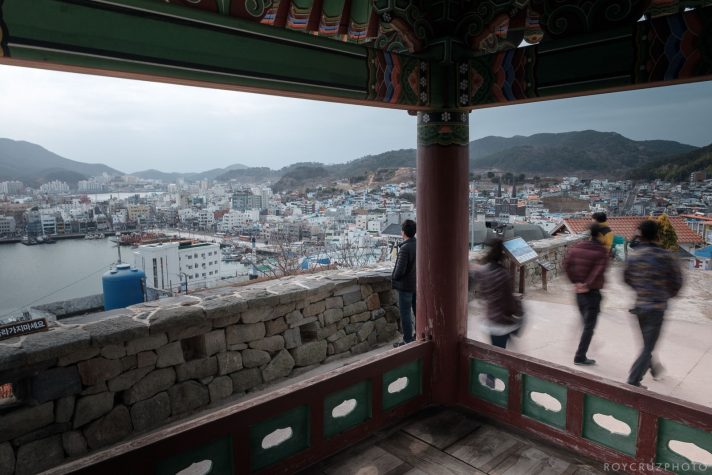 I found that you could really push the IBIS and get some nice slow shutter effects handheld. I wouldn’t use IBIS like this too often. You definitely have to take multiple frames and prop your arms up on support like walls and railings to get sharp images at around 1/4 and slower. Nevertheless, it’s nice to have slow shutter capability even without a tripod. In more practical applications, I could definitely see using shutter speeds of down to 1/15 sec fairly confidently during event/documentary shoots. Being able to shoot at cleaner ISO’s will be great for client work. Overall, IBIS seems to be worth the money for stills shooting.

For the next test, I wanted to test the new Eterna film simulation and street shooting from the hip using the rear LCD. For added ‘cinematic’ effect, I set the aspect ratio to 16:9. 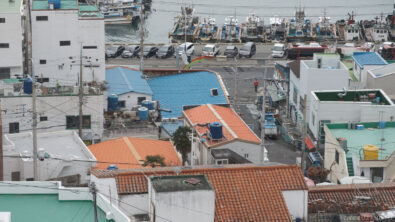 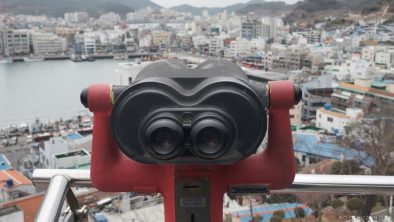 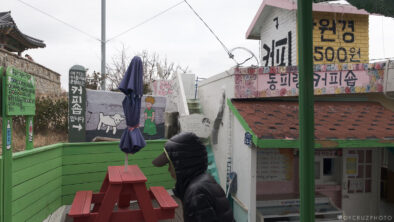 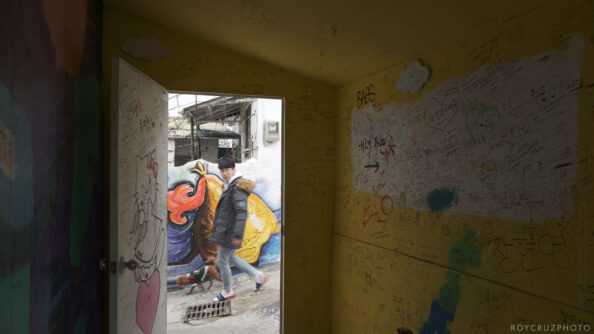 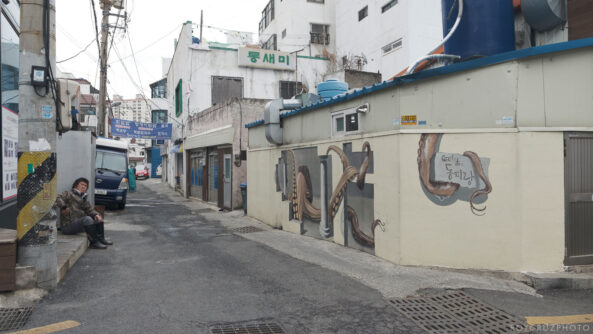 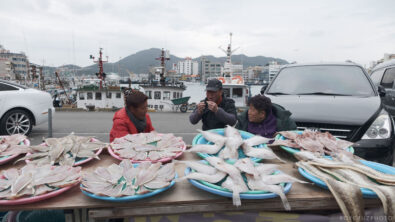 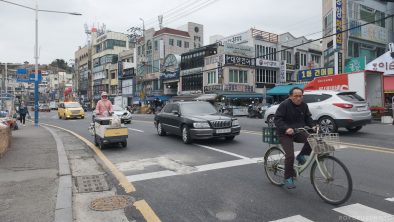 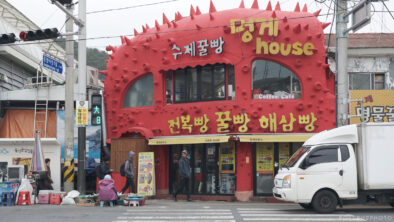 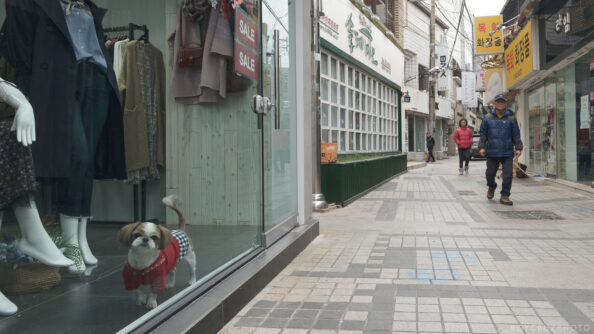 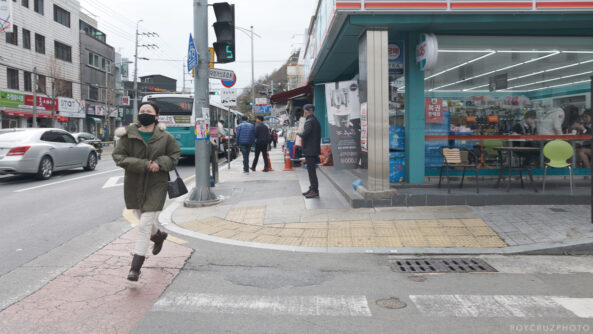 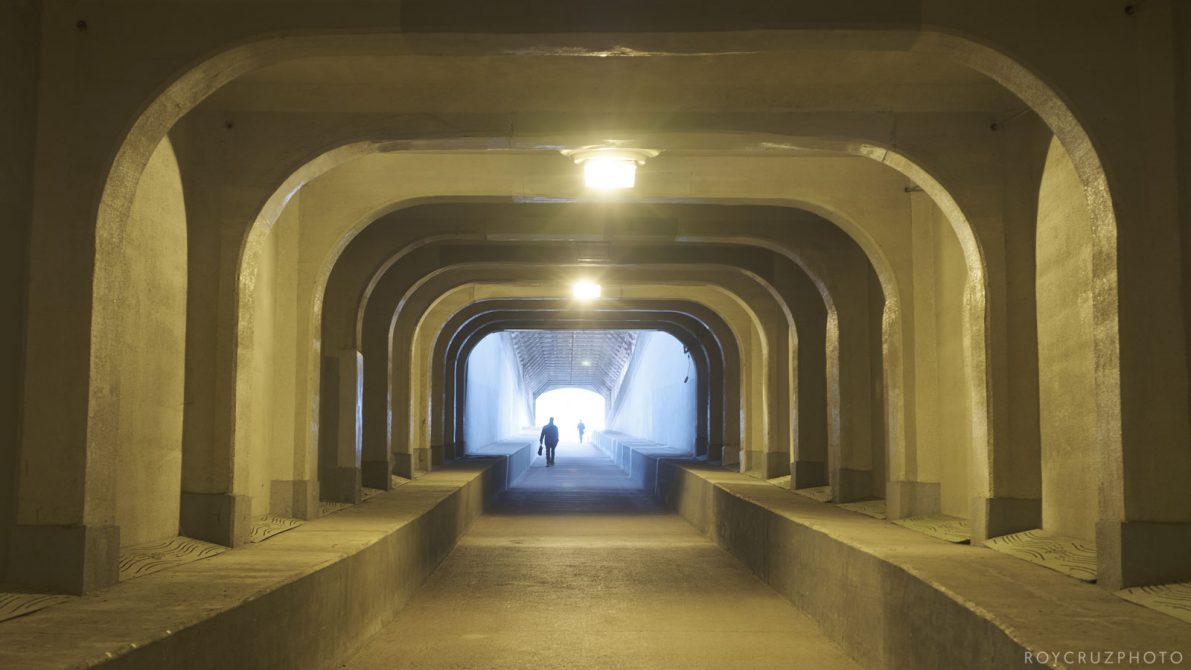 Overall, I think the Eterna simulation is alright for still photos. It’s much flatter than what I’m typically used to in my images. I usually edit contrast, highlights and shadows in Lightroom anyway. I definitely see myself using it more for video, which it seems to be originally intended for.

The real pleasant surprise was how responsive the camera was in the street. Autofocus was fast and accurate and I was able to nail shots more shots even while shooting from the hip with the LCD. I’m very impressed with the speed of this camera. If you’re happy with the X-T2’s performance, then you’ll be even happier with the X-H1’s.

In terms of battery life, I’m pretty happy with the performance. The 4-year-old non-Fuji battery was able to provide 354 shots before it died. The old battery performed better than stated in the manual. Aside from the settings mentioned above, this was done with a minimal amount of checking the shots on the screen and one transfer of images via Wi-Fi. One thing I didn’t like though was the accuracy of the battery meter in this case. It was still at 3 bars when it suddenly ran out and started blinking red. I will do further tests with the newer NP-W126S batteries, but I feel they will likely do better. 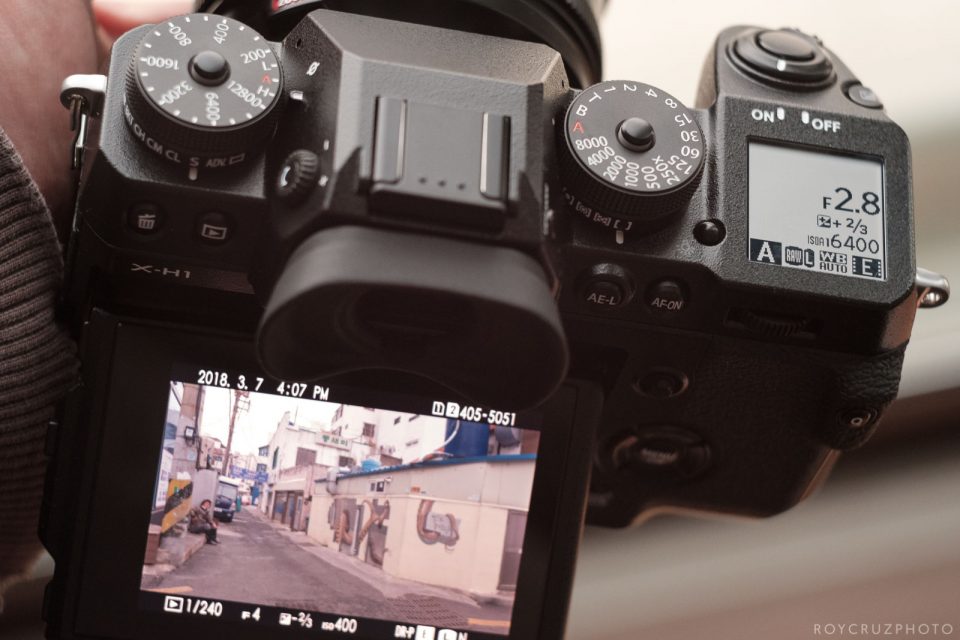 Overall, I’m quite happy with the X-H1. Here are the things I love most about the camera:

And some stuff I’m not a huge fan of at the moment (some of them could change with more time with the camera):

I hope my initial thoughts are helpful to some of you who are interested in this camera. I’ve just started my journey with the X-H1, but I can already see that it will be a good one! I’ll be sure to post any updates here.

This article contains affiliate links that help me out at no additional cost to you. Thank you!

Thank you for reading, Immanuel!

Nice photos Roy! I also recently acquired the xh1 and I see people posting stills with eterna. How did you set it with photos? I only see a video option for eterna in the menu.

Thanks for reading, TJ! It’s there. Just press the Menu button and you’ll see it under ‘Film Simulation’ in the ‘IQ’ panel. You can also set it up for quicker access in the Q Menu.

W126s battery are designed to have more heat dissipation. The initial message you got on the x-h1 is only a disclaimer to warning use the original 126, because when using 4k camera there is a risk for heat damage. If you only take stills you have no advantage with newer version.

Thanks for your input, Nicola!

Thanks for sharing your experience with this camera. I find it to big from my tastes (I left Full-frame Canon for a reason) but I’ve enjoyed reading your review.

Thanks for reading, Sergi! I totally agree! I think the X-T2/T1 size is perfect for Fuji X bodies, but overall the benefits seem to be worth the size increase. Hope they can shrink down the bodies with similar features in the future.

Roy, thanks for sharing your review on the H1, I just received it and would like to know if you use the IBIS along with the lenses that also have internal OIS. So far I love the camera and the handling it’s superb.

Hi Roy, glad to meet you on this post. I’ve just watched the youtube you’ve done with Dylan and the above blog you’ve written. There is one thing I like to ask for your suggestion. What basic settings are re using on your X-H1 to get 390 shots before battery is dead, as I find the battery life of X-H1 isn’t really that impressive. Thanks for your advice. John..

Hi John! Thank you for watching and reading! Here are my settings that might have influence on power consumption:

Very nice review. I just picked up the X-H1. After my Canon life ended (5D Mk II, and assortment of L lenses), my Fuji life began with the X-T1, then progressed to the X-Pro2. Unfortunately the shutter button/power mechanism fell off the X-Pro2, luckily it was insured, so the reimbursement check went to the X-H1. I like the shutter, although it surprised me as to how sensitive it is. The touch screen…. eh. I like it ok for zooming in to playback photos, but I turned off the touch screen for pretty much everything else. IBIS is great. The only lens I currently have with OIS is the 50-140, my primes (23/1.4, 35/2, 56/1.2) should benefit greatly. have you noticed any difference between performance mode normal vs boost? Also, I opted to have IS mode for shooting only instead of continuous.

Hi Philip. Thank you for reading the article! The IBIS is definitely a game-changer for the Fuji system. I have also been using the X-H1 a lot with fast primes lately and it’s so useful for low light shooting. As for the shutter, I’ve heard you can have Fuji calibrate it if you find it too sensitive. Boost mode does give you slightly faster autofocus and better EVF performance, but I usually leave it off for the battery savings. The camera is fast enough on normal mode, IMO.

Roy, I’ve recently stumbled across your site and I have to say, it’s the best out there!
Your comments about the ‘Q’ and the ‘AF-On’ button are spot on – my thoughts exactly, though I have switch the AF button to playback mode anyway as I don’t use that particular method of shooting.
In terms of the ‘Q’ button, just the option to switch it off would be a huge bonus, or assign it to other things (or assign another spare FN button to Q).

Keep up the great work, I’ll be sure to make my through all your articles; they are really such great reads.

Thank you for reading, Andrew! Interesting thoughts about the Q button. I use the Q menu a lot myself, but I can see how being able to reassign the Q button would be useful. Thanks again and best regards!

You have convinced me IBIS is what I need for my street photography as I don’t stop still fully anywhere near enough. 👍

Thanks for reading! IBIS is definitely a good tool to have in the arsenal.