I love teaching. I think it is one of the most important things to do in any craft. No matter what discipline, teaching is the only way to pass knowledge and skills down to the next generation of practitioners. In my various careers I’ve been a corporate trainer, English teacher, and now I teach photography whenever I get the chance.

Keena contacted me asking for a one-on-one photography lesson and tour during her visit to Seoul. She was interested in landscape and street photography, which are both passions of mine. After some thought and discussion, we came to an agreement and I began to make a workshop outline and itinerary. I wanted most of the workshop to be hands-on, learning while doing. I also wanted to show Keena a good variety of locations in Seoul during our one day workshop.

We hit the ground running with a sunrise shoot at Maebongsan (매봉산공원). Despite getting only an hour of sleep, Keena was able to make our 5:20 AM meeting time. We hiked up to the viewpoint, a 팔각정 (Korean style pavillon) with a great view of the eastern part of Seoul.  We were surprised to see many other photographers already set up, as it was a weekday. We greeted them and found our spots among the line of tripods. The weather wasn’t great and the visibility was terrible, but we made do. Here are Keena’s “sunrise” shots: 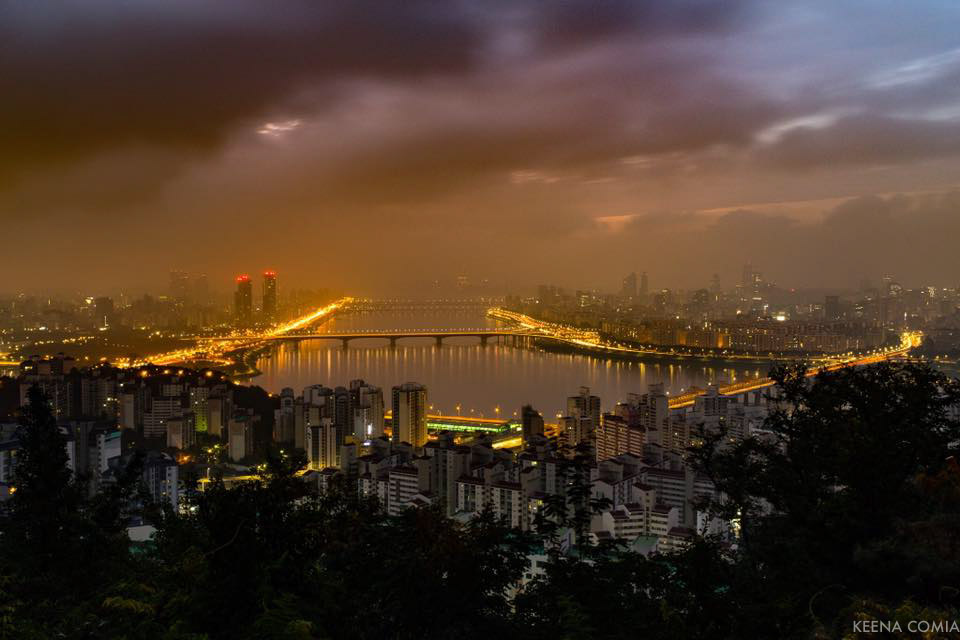 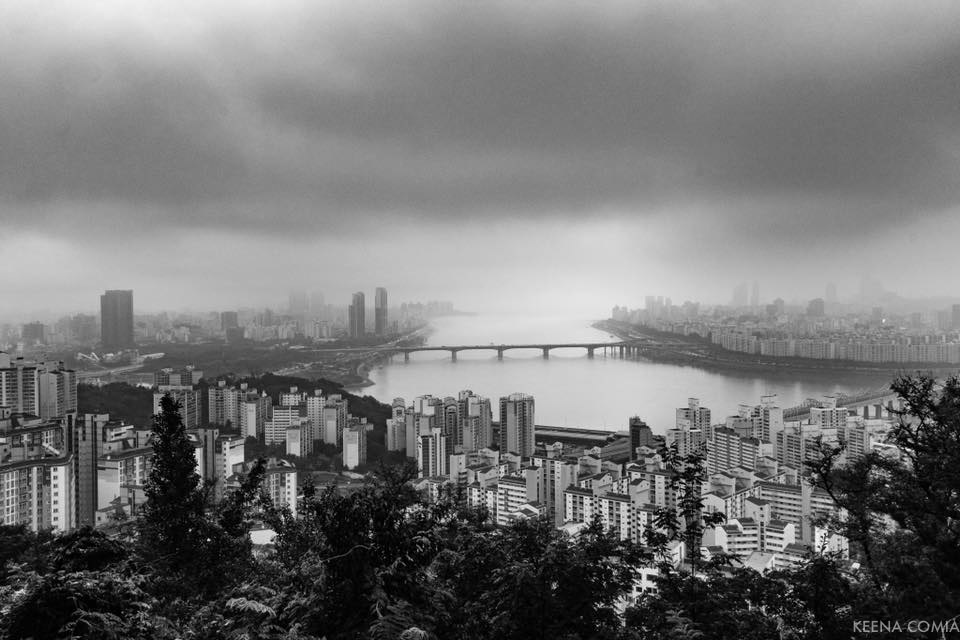 After the dawn shoot, we went into the camera basics lesson. Ideally I would have started with this first, but we had to work around the sunrise schedule. We practiced basic exposure settings in various situations. When I felt like Keena was starting to get a grasp of the exposure triangle, we headed to our next destination.

We planned to do some morning street photography at the Dongdaemun Design Plaza (DDP), but were quickly and happily sidetracked by the subway. The rush of people and photo opportunities got me excited and we began shooting every corner of the station we were in. It proved to be a bit of a sensory and information overload for someone still trying to get used to setting the camera manually, but Keena still pressed on. 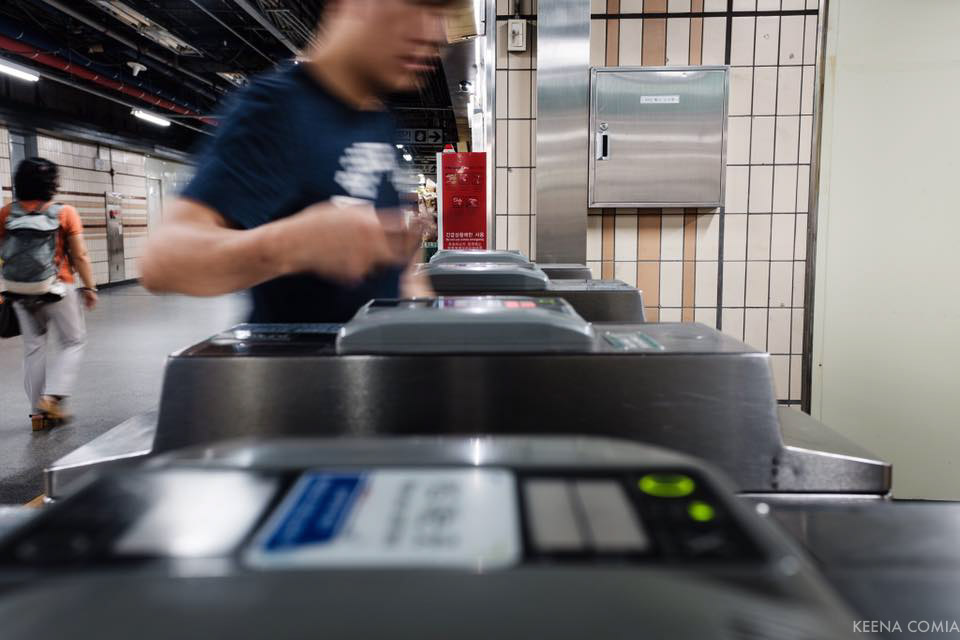 We finally got to the DDP and immediately began to enjoy the lines, shapes, and the trickle of people going through the futuristic structure. This is where I noticed Keena getting more and more used to operating the camera. The task of setting the camera was slowly but surely getting out of the way and her creativity was starting to flow. 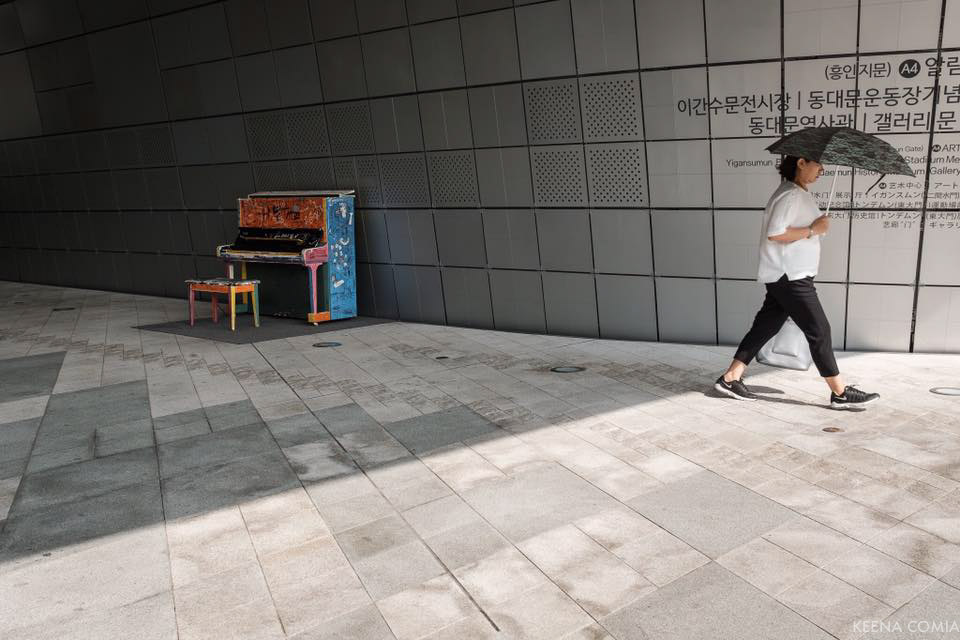 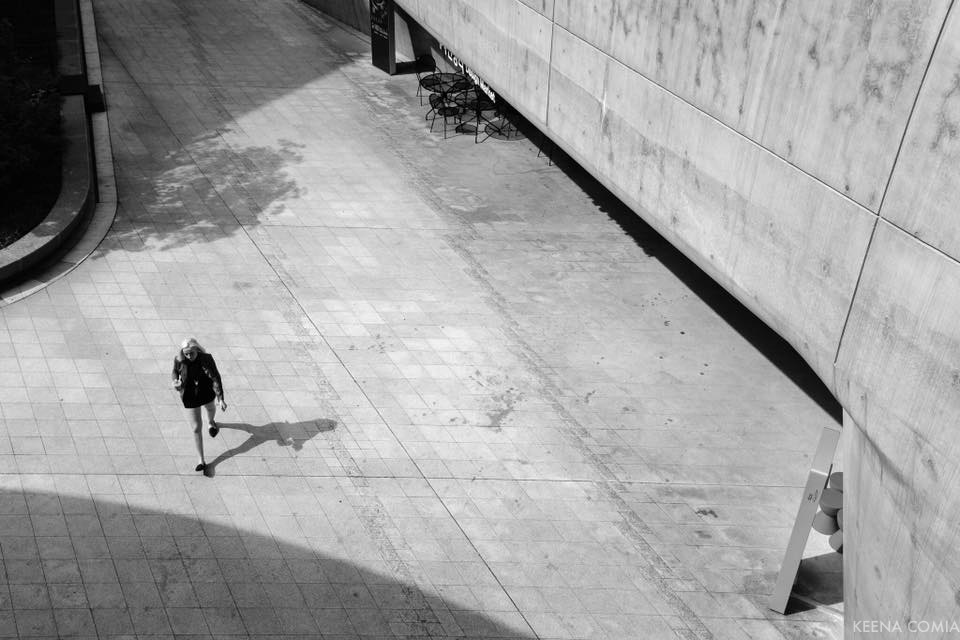 We arrived at Gwangjang Market (광장시장) after a quick subway ride. In my experience, markets are some of the best places for street photography. So I thought it would be fitting to bring Keena to one of the oldest markets in Seoul. It was also pretty hot out by this time, so a bit of time under the roof was perfect. Again, I saw Keena’s intensive practice paying off, as she continued to focus on the moments and the composition. Just a few hours earlier, camera settings were a new thing for her.  But now, she was letting her photographic eye do the work. 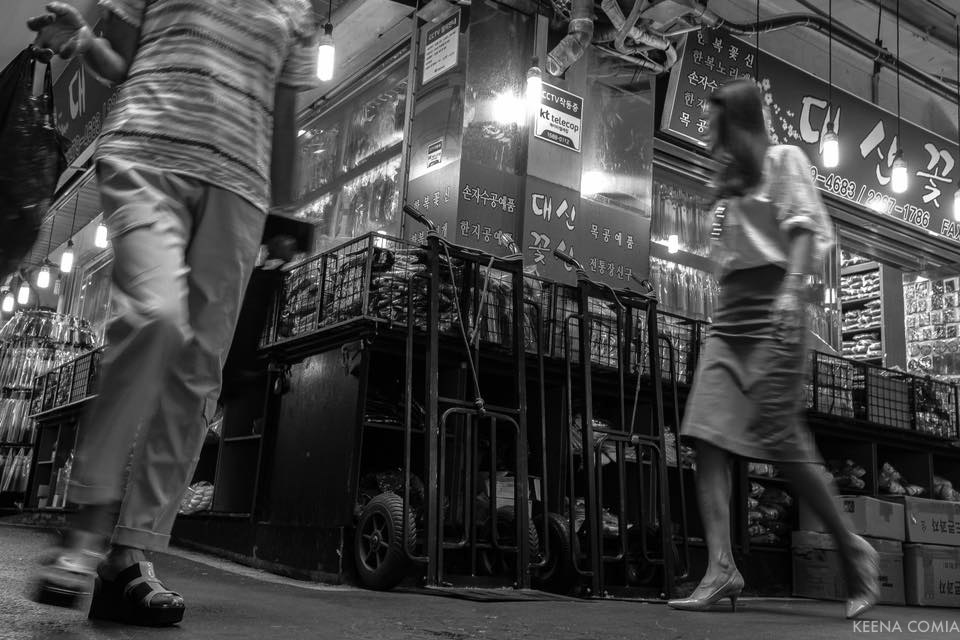 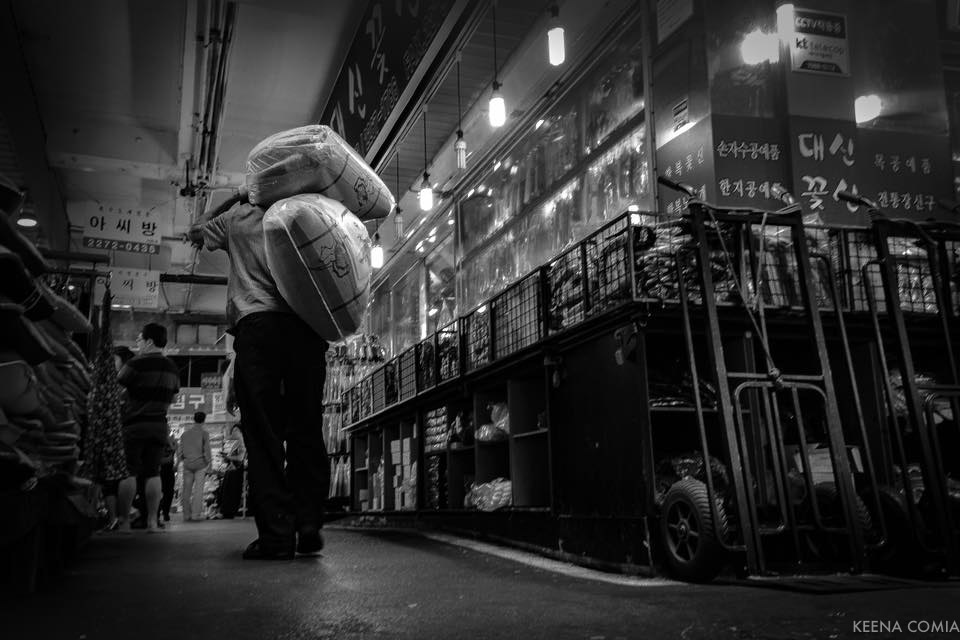 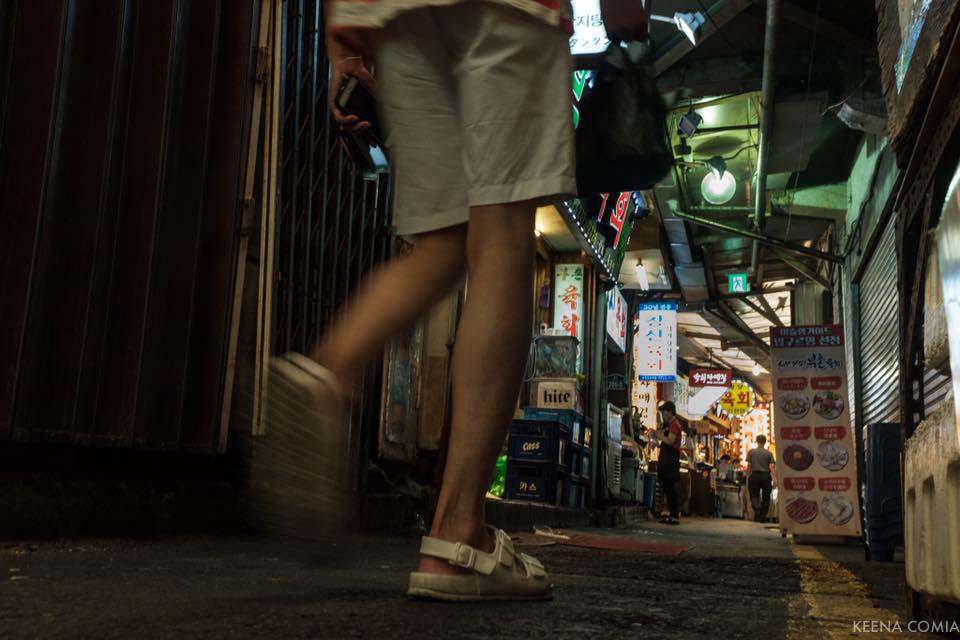 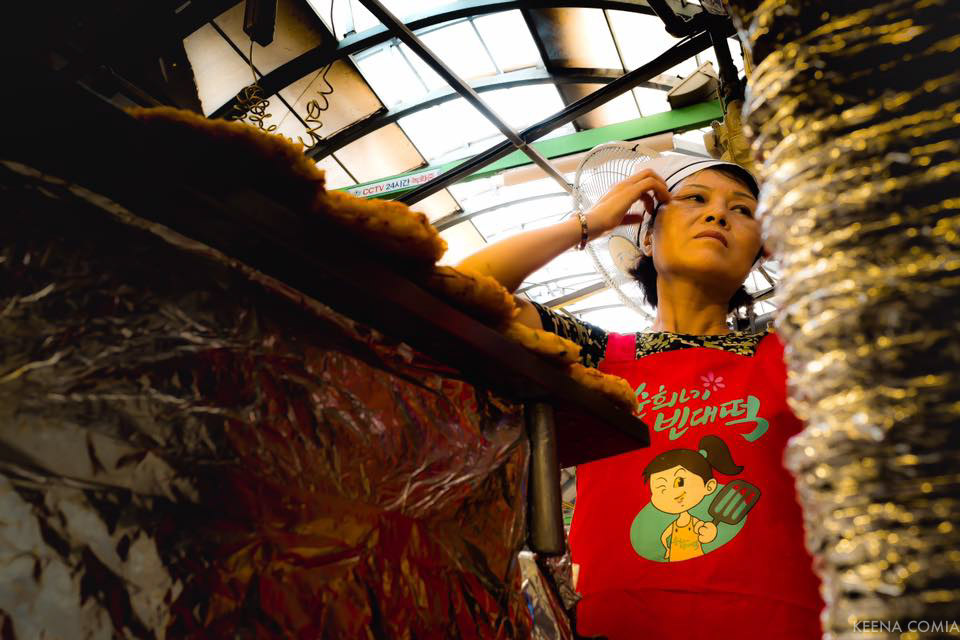 After the Gwangjang Market shoot, we sat down for more coffee and proceeded to the file management and post processing portion of the workshop. We spent a good couple of hours processing the morning’s photos. We enjoyed post processing so much we almost missed the next item on our itinerary.

The line to the Namsan Tower cable car was long as usual. I began to get nervous that we’d miss the sunset. It was particularly nice that day, enough to make up for the morning’s fairly crappy weather. Watching the beautiful clouds and colors from the departure area window, we anxiously inched our way up to the cable car platform. When we finally got up to Namsan park, it was a pretty mad rush up to the love locks platform where the sunset is visible. A bit more stress for my student, but hopefully a good lesson in some of the realities of photography. Luckily, there was one, just one spot for us to set up. We shot from sunset into blue hour. Keena applied the panorama technique we discussed earlier and came up with these nice images.

It had been quite a long day, but there was one last destination. The final mission was long exposures and light painting at Gwanghwamun (광화문). As the day progressed, I gave less and less guidance and let Keena take the lead in terms of setting and composition. For the final mission, I simply said “I have a light here. I want to write ‘Seoul’ in the photo.” Keena did a great job setting up and directing me to get our final shot of the day. 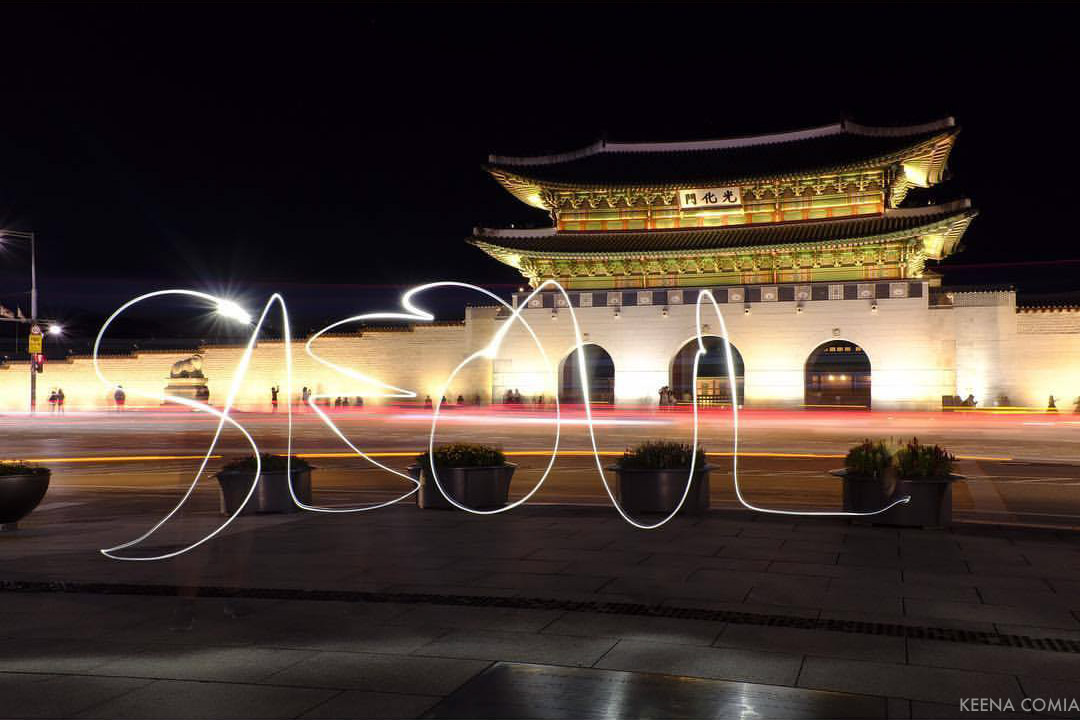 Overall, it was a great day out with Keena and I was so happy to see her progress as we went along. From our initial communication, I felt Keena’s eagerness and enthusiasm to learn. Her thirst for knowledge and curiosity really brought out the best teacher in me as well. The itinerary and amount of information was quite intense, but she was a trooper throughout the day. And it was so great to see her final shots.

Keep up the good work, Keena! I look forward to many great images from you!

If you are looking for a customized one-on-one or small group photography workshop in Seoul or anywhere in the world, please get in touch.